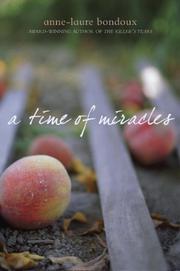 A TIME OF MIRACLES

A refugee boy and his mother flee Georgia in 1989 and travel alone through the Caucasus for eight years to reach France. Koumaïl has always lived with Gloria, who tells him stories of rescuing him from a bombed train and stealing passports from his dead French mother. As civil war engulfs the Caucasus, they escape, moving from one refugee camp to the next, suffering hunger and illness. Along the way, Koumaïl makes friends and finds first love, supported by Gloria, who calls him her "little miracle," promises "tomorrow life will be better" and reminds him to "be happy... at all times." When they arrive in France, Gloria vanishes, leaving Koumaïl to survive alone to become a real French citizen. Koumaïl tells his story "in the right order," from the perspective of a 20-year-old refugee who ultimately discovers his true identity and that of the optimistic, resourceful woman who made "up stories to make life more bearable." A beautifully cadenced tribute to maternal love and the power of stories amid contemporary political chaos. (Historical fiction. 12 & up)