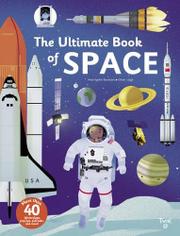 THE ULTIMATE BOOK OF SPACE

Flaps and pull-tabs in assorted astro-scenes reveal several wonders of the universe as well as inside glimpses of observatories, rockets, a space suit, and the International Space Station.

Interactive features include a spinnable Milky Way, pop-up launches of Ariane and Soyuz rockets, a solar-system tour, visits to the surfaces of the moon and Mars, and cutaway views beneath long, thin flaps of an international array of launch vehicles. Despite these bells and whistles, this import is far from ready for liftoff. Not only has Antarctica somehow gone missing from the pop-up globe, but Baumann’s commentary (at least in Booker’s translation from the French original) shows more enthusiasm than strict attention to accuracy. Both Mercury and Venus are designated “hottest planet” (right answer: Venus); claims that there is no gravity in space and that black holes are a type of star are at best simplistic; and “we do not know what [other galaxies] actually look like” is nonsensical. Moreover, in a clumsy attempt to diversify the cast on a spread about astronaut training, Latyk gives an (evidently) Asian figure caricatured slit eyes and yellow skin.