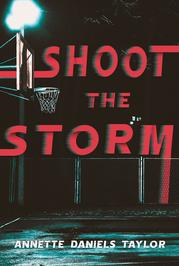 From the West 44 YA Verse series

Tragedy turns a top basketball prospect toward a life of hard, hurt-filled choices—but it’s never too late to become more than our pain.

When her loving ex-con father is assassinated, Aaliyah Davis’ already tumultuous life in Buffalo, New York, is turned upside down. A star hooper, like her father before her, and an unrepentant tomboy, to the chagrin of her absentee mother, 16-year-old Aaliyah experiences the sort of trauma no one should have to but that is unfortunately all too common. Her story is presented here in raw, poignant verse with first-person adolescent lyricism. With basketball no longer an effective distraction from her growing anger, a budding relationship with a schoolmate who’s suffered similarly from gun violence quickly turns into an opportunity for revenge. Until a stint in juvenile detention that pointedly parallels her father’s incarceration, learning to trust the right people proves to be disastrously difficult for Aaliyah and many of the young people in this complicated story of loss, betrayal, and widespread neglect—but it’s a hard-earned lesson that ultimately sets her free. Accessible for reluctant readers, the attractive design and fluid writing style make this a broadly appealing work. Main characters are Black.