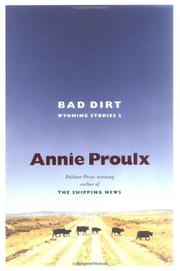 The much-honored author tightens her grip on the laureateship of western working-class America in this follow-up to Close Range: Wyoming Stories 1 (1999).

Here, again, Proulx limns the harshness of life in Wyoming (mainly in the mountain hamlet of Elk Tooth, site of three thriving saloons) in 11 unsparingly realistic stories. One of them, for instance, chronicles an arty New York couple’s eventual failure to adapt to the rugged surroundings they’d romanticized (“Man Crawling Out of Trees”); another depicts the renewed enmity between long-estranged siblings as they settle their recently deceased centenarian parents’ affairs (“Dump Junk”), rekindling unwelcome memories of “hard years . . . with their entanglement of emotional and money problems, vexing questions about the cosmos, the hereafter, the right way of things, and. . . the slow, wretched betrayals of the flesh.” Proulx’s genius for grim humor glows in wry tales about a beard-growing competition (“The Contest”), a geological malfunction that gives infernal aid to an overworked game-and-fish warden (“The Hellhole”), an ornery barmaid who deals with cattle illegally grazing her land by importing distinctly nonindigenous fellow critters (“Florida Rental”)—and even in the middling “Summer of the Hot Tubs” (predictably anecdotal, though it does make you wish Proulx had included her recipe for “son of a bitch stew”). Comparisons to Mark Twain are inevitable, but Proulx’s wiry sentences have more of the snap and crackle of vintage Ambrose Bierce, and the writer she really resembles most is Flannery O’Connor, as evidenced best in richly detailed accounts of a luckless drifter’s encounter with a violent white-trash “family” (“The Wamsutter Wolf”); of a young part-Sioux woman’s accidental discovery of a prosperous white family’s appropriation of her heritage (“The Indian Wars Refought”); and of a stubborn rancher who long outlives the wild old days, his youth, and all the opportunities he failed to grasp.

One of our best writers gives us her best book.