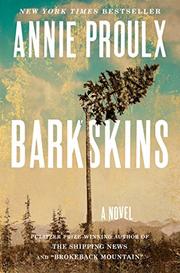 “How big is this forest?” So asks the overawed immigrant Charles Duquet, who, with his companion René Sel, has nowhere in the world to go but up—and up by way of New France, a land of dark forests and clannish Mi’kmaq people, most of whom would just as soon be left alone. The answer: the forest is endless. Finding work as indentured “barkskins,” or woodcutters, they wrestle a livelihood from the trees while divining that the woods might provide real wealth, kidnapping a missionary priest to teach Duquet how to read so that he might keep the books for a dreamed-of fortune. René founds a powerful local dynasty: “Here on the Gatineau,” Proulx writes, “the Sels were a different kind of people, neither Mi’kmaq nor the other, and certainly not both.” She drives quickly to two large themes, both centering on violence, the one the kind that people do to the land and to each other, the other the kind that the land itself can exact. In the end, over hundreds of pages, the land eventually loses, as Sels and their neighbors in the St. Lawrence River country fell the forests, sending timber to every continent; if they do not die in the bargain, her characters contribute to dynasties of their own: “He wanted next to find Josime on Manitoulin Island and count up more nieces and nephews. He had come out of the year of trial by fire wanting children.” As they move into our own time, though, those children come to see that other wealth can be drawn from the forest without the need for bloodshed or spilled sap. Part ecological fable à la Ursula K. Le Guin, part foundational saga along the lines of Brian Moore’s Black Robe and, yes, James Michener’s Centennial, Proulx’s story builds in depth and complication without becoming unduly tangled and is always told with the most beautiful language.

Another tremendous book from Proulx, sure to find and enthrall many readers.