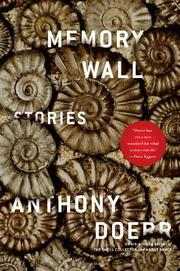 A collection of six stories—at least one long enough to be considered a novella—that illustrate Doerr’s sparse style, command of language and mastery of characterization.

The title story, the most elaborate in the collection, features the “harvesting” of the memories of 74-year-old Alma Konachek, who lives in a suburb of Cape Town. Three years earlier her husband, Harold, died immediately after discovering a rare fossil in the Great Karoo, a desert region in South Africa. Because the find is valuable as well as rare, a “memory tapper” breaks into Alma’s home, seeking the cartridges containing memories that have been harvested from wealthy people. While Luvo, the tapper, reviews the cartridges, the reader becomes aware of Alma’s past home and family life as well as the tensions in her marriage. Eventually, Luvo and his mentor Roger find the right cartridge and are able to retrieve the fossil, something of a miracle since the late Harold Konachek is convinced that the only permanent thing is change. The next story, “Procreate, Generate,” follows the heartbreaking story of Herb and Imogene, who after ten years of marriage decide they want children and are unable to conceive. The story almost reads like a documentary of their struggles with in vitro fertilization and the strain it places on their marriage. They finally conclude that “Nothingness is the rule. Life is the exception.” In “The Demilitarized Zone,” Doerr tells the story of an American soldier in Korea who buries a crane that hit a communications wire and almost gets court-martialed for his humanitarian act. In epistolary form, the story makes these implausible events both believable and moving.

Doerr (Four Seasons in Rome, 2007, etc.) moves the reader gracefully from place to place (the stories span four continents), from incident to incident, and from memorable character to memorable character by focusing on small acts that have larger resonances.