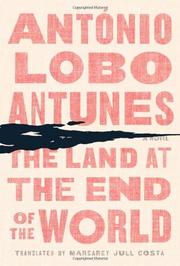 THE LAND AT THE END OF THE WORLD

This semi-autobiographical novel about Portugal’s war in Angola was originally published in 1979.

That war, Portugal’s doomed attempt to hang on to its African colony, lasted from 1961 to 1974. It was conducted ineptly by the Fascist regime of dictator António de Oliveira Salazar. The unnamed narrator, a doctor, was conscripted in 1971. He presents us with three selves. The first is the thumbnail sketch of a child and young man who is the product of right-wing youth movements and Catholic ritual. A loner, he is the prisoner of melancholy. That word permeates the novel. The second self is the 20-something doctor unwillingly at war, living in a desolate, hellish series of barracks in Eastern Angola. The PIDE (secret police) agents are fearsome. Antunes challenges himself (and the reader) by describing the scene in dense paragraphs of run-on sentences. What should be incantatory too often becomes monotonous. Moments of relief are few: on leave in Lisbon with his wife and daughter, back in the bush in the arms of Sofia, his African washerwoman; here, the white oppressor granted absolution by his magnanimous black victim is a disappointing stereotype. The narrator becomes radicalized, cursing the Fascists who have sent him on this fool’s errand; yet for him the greatest horror is lacking the courage to protest, even as a PIDE agent inflicts torture, even after learning that they have abducted Sofia. We see the result in the narrator’s third self: the doctor in Portugal several years later, an empty shell. He is talking to a female companion, a late-night bar pick-up. (These moments alternate with the Angola scenes.) He invites her home but is unable to satisfy her; no surprise there. It’s also no surprise that he’s separated from his wife and alienated from his daughters; the author’s grim determinism has foreclosed different outcomes.   More effective as an indictment of colonial war than a psychological study.