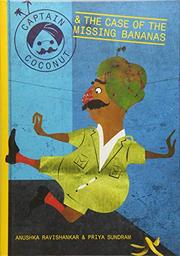 CAPTAIN COCONUT AND THE CASE OF THE MISSING BANANAS

From the Captain Coconut series, volume 1

He sets out to solve a case involving the three members of an Indian household: Mrs. Y, her sister, and her nephew, Gilli. Mrs. Y bought 14 bananas, but some are missing. She can account for four—they were eaten—but only six can still be found. After using his calculator to perform the simple mathematical task involved, the detective quickly realizes how many are gone, but the determined sleuth must still find the perpetrator. References, visual and verbal, to Bollywood musical interludes and vaudeville slapstick (remember banana peels) spice up the action, but the math is not complex enough for readers who have the sophistication to enjoy the dry wit and the unusual collage panels of this short graphic novel. The foolish detective, with his round belly sticking out of his safari suit and his red knee socks matching his red paisley nose, can’t open his office door or start his scooter, but of course he does finally solve the mystery. Suffice it to say, an unpleasant stomach ailment provides a clue. Creative readers can provide their own tunes for the three original songs, and the digital collages are filled with zany retro details.

Perhaps the captain’s next outing will find all its elements in better sync.