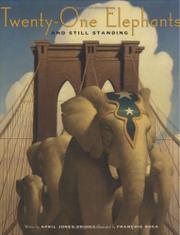 Strong rhythms and occasional full or partial rhymes give this account of P.T. Barnum’s 1884 elephant parade across the newly opened Brooklyn Bridge an incantatory tone. Catching a whiff of public concern about the new bridge’s sturdiness, Barnum seizes the moment: “’I will stage an event / that will calm every fear, erase every worry, / about that remarkable bridge. / My display will amuse, inform / and astound some. / Or else my name isn’t Barnum!’” Using a rich palette of glowing golds and browns, Roca imbues the pachyderms with a calm solidity, sending them ambling past equally solid-looking buildings and over a truly monumental bridge—which soars over a striped Big Top tent in the final scene. A stately rendition of the episode, less exuberant, but also less fictionalized, than Phil Bildner’s Twenty-One Elephants (2004), illustrated by LeUyen Pham. (author’s note, resource list) (Picture book. 7-9)