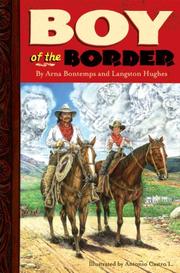 BOY OF THE BORDER

by Arna Bontemps and Langston Hughes and illustrated by Antonio Castro L.

This rediscovered gem from two giants of the Harlem Renaissance is more than just an historical curiosity. Young Miguel is up for the adventure of a lifetime when he accompanies his Uncle Mario from his humble hometown in la frontera—the borderlands—to faraway Los Angeles. Once there, they will sell a herd of broncos and visit his Aunt Chona. Along the way, the party encounters bandits, sandstorms and gypsies and fords the Colorado River in epic fashion. Miguel makes new friends, trains a colt of his own and grows up a little bit. Despite the age of the story (it was written in the 1930s), the prose is both accessible to middle-grade readers and evocative of its Southwest setting. The only disappointment is that an intriguing legend about a mythic white stallion is introduced but never followed up. An afterword provides cultural and historical context for this solid, old-fashioned adventure tale. (Historical fiction. 10-14)