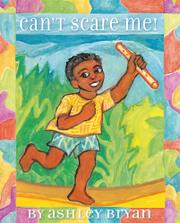 It’s Anansi. It’s Coyote. No, it’s a boy wonder who knows no fear.

Despite his diminutive size, this young, brown-skinned protagonist boasts of fearing nothing, even when his grandmother tells him that the two-headed giant and his three-headed brother catch and eat little boys who wander home after dark. When the three-headed giant does catch and prepare to eat the boy, only his musical prowess saves him from an untimely death in the giant’s kitchen. The boy’s refrain, “Tanto, tanto, I’m wild and I’m free. / Grandma’s stories can’t scare me,” makes this tale imminently tellable, and his musical tune, “Too-de-loo-de-loo-de-loot!” makes it singable as well. Bryan’s characteristically colorful and rustic paintings portray the contrast between the small boy and the massive giants well, making the boy’s humility all the more amazing when he returns to the lap of his grandmother a wiser and more humble boy. Though some of Bryan’s rhymes are forced and the giants seem more goofy than scary, the compelling plot and vibrant illustrations will keep readers entertained.

This musical trickster breathes new life into an old tale.