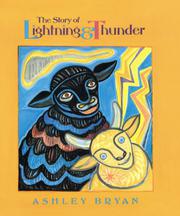 THE STORY OF LIGHTNING AND THUNDER

A delightful adaptation of a Nigerian folktale about "Ma Sheep Thunder" and her "Son Ram Lightning," who live in a village where the people rely on them to call their friend Rain down from the clouds over the mountain. But Son Ram Lightning is so unruly that the King exiles the pair to a faraway home in the sky, from which Lightning still sometimes streaks wildly back to earth, striking anything in his path, while his mother follows behind and calls him back in her rumbling voice. Written to be read aloud (perhaps to a rambunctious child), with bits of rhyme and unexpected wordplay—the King scolds Lightning: "It is an outrage at your age to go on such a rampage!" There is one of Bryan's uniquely vibrant, swirling, light-filled paintings on every page. (Folklore/Picture book. 4-8)