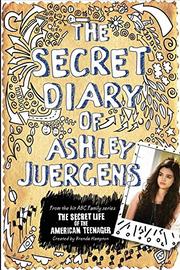 THE SECRET DIARY OF ASHLEY JUERGENS

Ghostwritten for a fictional 13-year-old character on the ABC Family network show Secret Life of the American Teenager, this September-to-August journal recaps the first season and part of the second—from 15-year-old sister Amy’s revelation that she’s pregnant through her parents’ divorce and the news that her mother herself is expecting. In the snarky tone she generally takes onscreen, narrator Ashley relates events from her own point of view and elaborates on them in long, wordy entries replete with adolescent self-assurance. Of a run-in with the school principal, for instance: “I think the real reason I got into trouble was because I expressed my individuality. It tends to scare authority figures when someone my age does that.” This “enhanced” e-book includes 10 brief video clips embedded in the general vicinity of their relevant passages. There is also a closing page of links to expedite the posting of reader ratings and reviews. Aside from a pair of footnotes pushed to a screen at the end, far away from their original contexts, the translation to digital format works seamlessly for reading/viewing in either single-page/portrait or double-page/landscape orientation. There’s enough standard-issue teen and domestic drama here to keep fans of such fare reading, but devotees of the show may be disappointed at the lack of significant new content, either in the narrative itself or in the e-book’s media features. (Fiction. 11-13)