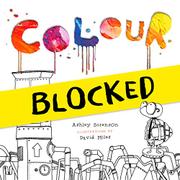 Pipes get clogged and readers must help.

A steampunk-lite factory with curving, outdoor chutes and tubes—the whole thing possibly floating in the sky as its own planet—shoots colors into the air. The scene is brightly colored. On the second spread, the factory morphs into a black-line drawing of itself, not a single bit colored in; no color sprays out. “Uh-oh”—the color is “blocked,” and while some readers may wonder how a blockage of new liquid has rendered the whole factory suddenly black-and-white, others will dig into the instructions on helping. Shaking the book unclogs pipes; turning the book all the way around inexplicably straightens out twisted pipes; turning it sideways dumps out excess color. As primaries flow, they become secondaries; paint-y chaos builds until the bespectacled host turtle, overwhelmed, pleads, “Shut the boooooooooooook!” The color-mixing, paint textures, and splatters are visually fascinating, and the complex pipes are cool, but the paint flow and instructions seem arbitrary, and the illustrations are disjointed. Miles’ mixed media on board includes some stock images, and while it’s unclear which ones, that’s hardly a recommendation. Hervé Tullet’s Mix It Up (2014) is far more luscious, and Eric Telchin and Diego Funck’s Black and White Factory (2016) covers very similar ground, down to animal hosts wearing glasses; both feature reader participation.

Not a first choice.