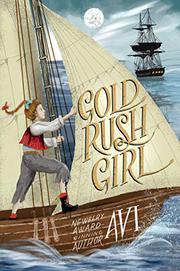 Tory encounters the independence and adventure she longs for in the untamed city of San Francisco in 1849.

Thirteen-year-old narrator Victoria Blaisdell, known to her family as Tory, lives a comfortably privileged life in mid-19th-century Providence, Rhode Island. She is frustrated and constrained by the influence of her maternal aunt, Lavinia, who believes that girls are to take care of boys and should be educated only at home. But when Tory’s father loses his position and wages and decides to seek gold in California, Tory stows away on the ship that will take him and her fretful younger brother, Jacob, on the seven-month journey to San Francisco. There, Tory finds work to keep herself and Jacob going while their father heads off to the gold fields. When Jacob is kidnapped to be a cabin boy for a ship heading out of the Golden Gate, Tory must appeal to her new friend Thad from Maine and to Sam, a wary young black man from Sag Harbor, New York, to help her navigate an underworld of gambling, rogues, and abandoned ships. Sam and Señor Rosales, who runs the cafe near Tory and Jacob’s tent, are the only nonwhite principal characters. Tory is the only girl. Avi evokes Gold Rush–era San Francisco through Tory’s eyes with empathy and clarity while keeping the action lively.