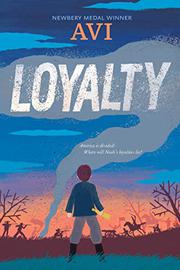 A 13-year-old Tory spies on the Sons of Liberty.

When they overhear Noah’s minister father read the line, “bless, and defend, and save the king” from a prayer book, neighbors in their small Massachusetts village storm the house and coat him in “boiling tar”; three days later he dies in agony. Noah, his mother, and his sisters flee to Boston, where they move in with Noah’s great-uncle. Noah, determined to both support his family and defend his father’s honor, takes a job in the Green Dragon, a tavern that is a known haunt of the leaders of the Sons of Liberty, a group of rebel Whigs. There he works under Jolla, a young free Black man, who, as the rebellion churns on, challenges Noah’s ideals of liberty and loyalty by pointing out how both sides enslave and coerce Black people. Noah’s reaction to his father’s horrific death, along with other characters’ emotions throughout the novel, comes across as muted and distant; the journallike narration tells far more than it shows. Noah’s relationship with Jolla feels like a plot device in which the latter functions as the wise, enlightened protector who educates the White boy about racism. Jolla devotes considerable energy to guiding Noah while confiding in him to an unrealistic degree. A climactic final scene follows a White savior script without questioning the underlying assumptions.

A flawed attempt to examine Colonial America through a nuanced lens.