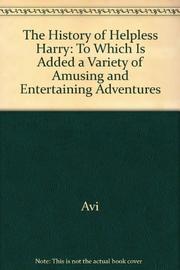 THE HISTORY OF HELPLESS HARRY

To Which Is Added A Variety Of Amusing And Entertaining Adventures

A literary conceit, mocking the conventions and sentiments of old-time fiction, has precious little chance with youngsters of nine or so. But this one self-destructs in the first couple of pages—when we're asked to think of eleven-year-old Harry, child of overprotective parents, as a "small boy" whose "soft eyes and appealing mouth" have caused him to be taken as helpless. And throughout the ensuing events, he hasn't indeed a clue to what we, the readers, know: that Miss Annie Trowbridge, the minister's 15-year-old ward who's taking care of him in his parents' absence, is really married to Mr. Nicholas Pym (whom she introduces as her half-brother); that she laughed at a proposal from fat Constable Narbut, so he's out for revenge; that his parents told a fellow-passenger, Mr. Jeremiah Skatch, seller of uplifting tracts, about the strongbox they left behind in Miss T.'s care, so he's out to get the box and lay the blame on Miss T. Harry just resents Miss T. (because his parents went off); is taken in by Mr. S. (because he calls him "brave, bold," etc.); and never does get straightened out until the last pages. . . of a book that's mostly making fun of itself (and not a little of poor Harry). A dubious undertaking not very well executed.