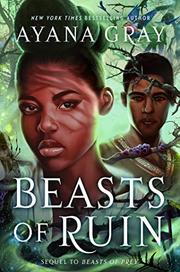 After a perilous adventure, a disgraced warrior and a newly minted daraja must face the consequences of their actions in this follow-up to Beasts of Prey (2021).

Ekon and Koffi return, each having experienced life-altering events that have caused them to reevaluate themselves and their futures. Koffi awakes in Thornkeep, a strange land belonging to Fedu, the god of death. After she freed the Shetani of her splendor, Fedu kidnapped Koffi and secreted her away with other darajas he holds captive for their skills at channeling energy from the earth. Realizing he plans to use her as his weapon, Koffi finds allyship with like-minded darajas who wish to escape: She promises to guide them through the treacherous forest, and in return, they will help her learn about her heritage. Ekon has been hiding in the city of Lkossa with Themba, Koffi’s estranged grandmother, since learning shocking truths. He and Themba search for leads as to where Fedu took Koffi, and as they leave Lkossa, they meet a group of spice merchants who agree to let them join their caravan. Ultimately, both Ekon and Koffi will need to rely on their newfound communities to overcome powerful forces. Readers will be entranced as themes of heritage, betrayal, and erasure are brought to life with vivid details in this riveting, fast-paced volume that lives up to its predecessor. All characters are Black.

An absorbing story with tantalizing hints of more to come.