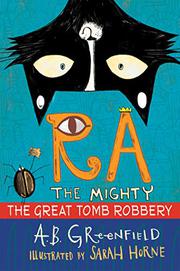 From the Ra the Mighty series, volume 2

The Pharaoh’s pampered cat loves his snacks, his naps, and many other royal privileges.

Ra the Mighty is also lazy, vain, and entirely self-centered. He once solved a mystery and is exceedingly proud to have done so, considering himself a Great Detective (Ra the Mighty: Cat Detective, 2018). But he has no burning desire to become involved in a case now, especially if it would interfere with those naps and snacks. But a Great Mystery is thrust upon him when he travels to Thebes to be measured for his place in Pharaoh’s planned tomb. The tomb of Pharaoh’s ancestor—and of Ra’s own forebear—has been robbed. Reluctantly, Ra and his more-eager cohorts, Miu the kitchen cat and Khepri the scarab beetle, narrow their list of suspects and discover clues amid daring deeds and dastardly betrayals. To add insult to injury, Ra is mistaken for an ordinary cat when the evil Vizier sends a substitute to Pharaoh, and he must make do with ordinary food and a great deal of dirt and discomfort, complaining all the way. Of course innocents are saved, guilty ones are punished, and the Great Detectives triumph. Greenfield keeps the action fast-paced, seamlessly weaving in much information about ancient Egypt, and the interactions among the distinctive and delightful characters are hilarious. Horne’s elongated and exaggerated black-and-white illustrations add to the fun.

May Ra the Mighty (and friends) solve many more ancient mysteries.