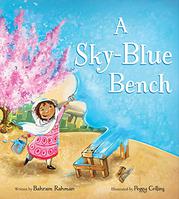 An Afghan girl resourcefully finds a way to accommodate her new prosthesis.

After losing her leg in an accident, Aria is finally ready to return to school with her new “helper-leg.” But all the school benches have been used for firewood, requiring students to sit on the floor—which hurts Aria’s leg terribly. In a montage of awkward positions, Aria attempts to alleviate her discomfort to no avail. Despite the other girls’ skepticism, Aria resolves to build her own bench, insisting she “can do anything a boy can.” When she consults kind carpenter Kaka Najar for help, he gives her tools and a can of sky-blue paint—the color of “courage, peace and…wisdom.” With help from her mother, her little brother, and a friend, Aria proudly builds a bench and assures inspired classmates, “We can build everything we need, together!” Gently but poignantly, Collins’ richly hued, cartoon-style illustrations convey Aria’s discomfort, determination, and joy; family members’ and friends’ warm eyes and sympathetic faces are reassuring. Background characters bustle in a rainbow of jewel-toned clothing, their faces bearing a variety of expressions. Though Aria’s accident is unspecified in the simple primary text, an author’s note reveals that Aria’s story, partially based on Rahman’s childhood during Afghanistan’s civil war, honors Afghan children whose lives were changed forever by unexploded ordnance. Most characters’ complexions, including Aria’s, are varying shades of brown.

A timely, eye-opening portrait of resilience, community, and hope.