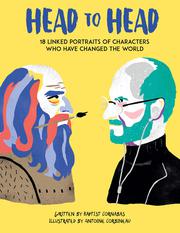 18 Linked Portraits of People Who Changed the World

Mixing contemporary celebrities with historical figures, Corbineau pairs off his gallery of full-page portraits by theme, the images all reworked from photos or prints into cut-paper collages with highly saturated hues. Gandhi and Rosa Parks exemplify nonviolent protest; Mother Teresa and Angelina Jolie are (mostly) commended for their work with impoverished people; and a “common point” between Gutenberg and Mark Zuckerberg is that both revolutionized the ways we communicate. The portraits, on opposite ends of gatefolds, open to reveal short biographies flanking explanatory essays. Women and people of color are distinctly underrepresented. There are a few surprises, such as guillotined French playwright Olympe de Gouges, linked for her feminism with actress Emma Watson; extreme free-fall jumper Felix Baumgartner, paired with fellow aerialist record-seeker Amelia Earhart; and Nelson Mandela’s co–freedom fighter Jean Moulin, a leader of the French Resistance. In another departure from the usual run of inspirational panegyrics, Cornabas slips in the occasional provocative claim, noting that many countries considered Mandela’s African National Congress a terrorist organization and that Mother Teresa, believing that suffering was “a gift from God,” rarely gave her patients painkillers. Although perhaps only some of these subjects “changed the world” in any significant sense, all come off as admirable—for their ambition, strength of character, and drive.