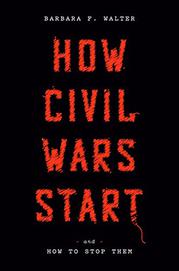 And How To Stop Them

The idea that a second American civil war is brewing is not alarmist hyperbole.

“We are no longer the world’s oldest continuous democracy,” writes Walter, a professor of international relations who has written multiple books about the mechanics of civil war. Instead, the U.S. is now an “anocracy,” a democracy on the road to becoming an autocracy. Chalk much of that decline up to Trump, of course, and those who abetted his efforts to establish an autocracy and preserve it by means of a coup. The image that should be brought to mind is not of columns of blue- and gray-clad soldiers meeting on battlefields; instead, it lies in the scattered rubble of the federal building in Oklahoma City and the insurrection at the Capitol on Jan. 6, 2021. Walter locates similar circumstances in Ukraine and Myanmar, among other places where “elected leaders—many of whom are quite popular—start to ignore the guardrails that protect their democracies.” Even though the number of democratic nations has grown markedly in the last century, the path to getting there is perilous, since entrenched power interests will always resist sharing their power. Another element of danger to popular rule is technological. “It’s not likely to be a coincidence,” writes the author, “that the global shift away from democracy has tracked so closely with the advent of the internet, the introduction of the iPhone, and the widespread use of social media.” Amplifying radicalism and rewarding attack, such media undermine public trust and reinforce long-standing resentments, a critical component in an antinomian environment in which right-wingers “choose the strategy of the weak: guerrilla warfare and terrorism.” Walter offers a few solutions: eliminating the Electoral College, reforming the Senate, and banning radical expression and disinformation campaigns on social media, for “curbing the dissemination of hate and disinformation would greatly reduce the risk of civil war.”

Arresting reading that identifies obstacles and dangers to democracy, many at the highest levels of government.