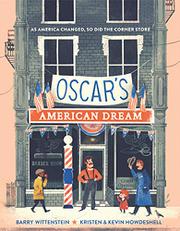 From Ellis Island immigration through women’s suffrage to the civil rights movement, Wittenstein endeavors “to better understand the past by looking at just one building.” The titular Oscar, a Polish immigrant, opens a barbershop in 1899. Over the next 100 years, the businesses reflect the times: a Great Depression soup kitchen, a World War II Army recruitment center, and so on. The Howdeshells’ illustrations, Rockwellian in feel, are beautifully rendered and offer many details to examine—and historical cues for adult readers to point out. While Oscar appears only briefly at the beginning, the title is apt, as Wittenstein’s device means his synopsis of American history is told primarily from a White, European lens. Unfortunately, aside from one Puerto Rican shop proprietor, Moises, who comes along fairly late in the narrative, children of color will mostly see reflections of themselves as side characters. Their inclusion makes for diverse scenes but ultimately conveys idealistic portraits of integrated American life even in the eras prior to the Civil Rights Act of 1964. For a more diverse slant on New York City immigration, consider Dave Eggers and Shawn Harris’ Her Right Foot (2017). (This book was reviewed digitally with 11-by-17-inch double-page spreads viewed at 59.3% of actual size.)