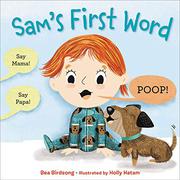 Little Sam is the adored child of Mama and Papa. She also has a doting grandmother and a friendly neighbor named Mr. Theotopolous (whose surname suggests Greek heritage and whose light-brown complexion is darker than Sam’s light-skinned family). Everyone cheers Sam on as she achieves various milestones, and they anxiously await her first word. To humorous effect, they also each try to coach her so that word is Mama, Papa, Nana, and Mr. Theotopolous, respectively. They get so caught up in that coaching that they miss the fact that Sam is already saying her first word, repeatedly: “Poop.” Unfortunately, this punchline is given away on the book’s cover, which undermines the humor on a first reading, but this is the only misstep in a book that otherwise gets its pacing just right. Hatam’s crisp, bright illustrations capture Sam’s efforts to get the grown-ups’ attention as she finally resorts to stripping off her soiled diaper and declaring “POOP!” one final time. Like many a toddler, Sam stands proudly naked, the cartoon style presenting a frontal view of the child without anatomical detail. A clever ending reveals Sam’s second word as the cherry on top of this sweet toddler story.