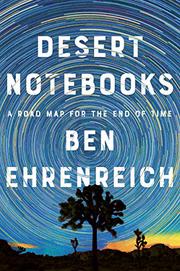 A Road Map for the End of Time

An urgent plea to revise our relationship to the planet, each other, and time.

Journalist Ehrenreich, a contributor to the Nation as well as many other publications, offers a thoughtful, often stirring, meditation on nature, myth, philosophy, politics, and time from the vantage of two starkly different desert environments: the “surging beauty” of Joshua Tree National Park and the assaulting seediness of Las Vegas. The desert, he observes, “enforces its own perspective. It shrinks you and puts eternity in the foreground.” Eternity is much on Ehrenreich’s mind as he considers the dismal prospect of “real, planetary disaster” and wonders whether literature, including the vocation of writing, may be pointless. The author is by turns melancholy, pensive, and, above all, angry: notably, at the “short-sighted, addled, deluded, demented, arrogant, venal, and vain” president he refers to as the Rhino; at climate change deniers; and at “overconfident elites” who propagate the ideology of progress. For Ehrenreich, progress is anathema. Along with a lyrical, freshly observed record of exploration, the author puts forth a manifesto against the prevalent, and destructive, notion of time—“the one that rules most of our lives and how we live them,” that insists on history as a linear progression exalting white Europeans, and that depends on “the illusion of eternal, self-sustaining growth” to justify the exploitation of peoples and environments. He draws on astronomy, archaeology, anthropology, and ethnography as well as Greek, Roman, Mayan, and various Indigenous people’s mythologies, especially as they evoke owls, widely depicted as “omens or messengers” of “death and war and maybe also wisdom.” Ehrenreich cites abundant literary and philosophical sources, including Borges, Beckett, Hegel, Rousseau, and Walter Benjamin, to create a rich tapestry of ideas that cohere into “an audit, a foreclosure, a notice to appear,” and a declaration of “the all-but-lost art of speaking truth to power.”