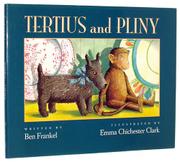 Tertius, a toy Scottie, and Pliny, a one-eyed monkey, have lived on an antique store shelf together for a long time when two children happily whisk Tertius away. In his new home, Tertius meets another toy, Baron Hendrik von Krug; the two set off for the store in the Baron's red biplane, and after an exciting, dangerous rescue, the companions are reunited. Frankel treats all her characters—flesh or fabric—alike; so does Clark, who gives both people and toys subtly changing expressions, freedom of movement, and fixed, buttonlike eyes Ö la Victoria Chess. Though the plot is childlike in its simplicity, Frankel's voice is refreshingly sophisticated, without offering any real difficulty. A brief, witty tale, told without condescension. (Picture book. 6-8)