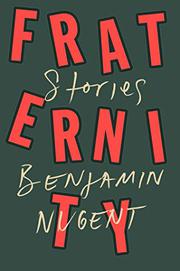 Nugent won the 2019 Terry Southern Award, Paris Review's annual prize for humor, and this collection of eight interconnected stories makes it easy to see why.

The comedy in Fraternity, as befits its subject, is dark, uncomfortable, even disturbing. The stories are set in a Massachusetts college town (clearly Amherst), and the focus is on young men who are in many ways the usual suspects: hearty-partying casual misogynists, macho tribalists, the toxically masculine. But Nugent understands that satire is a means not only of exposing or ridiculing its subject, but of making them, using the rules of their own skewed logic, understandable, even sympathetic. They're a varied group. There's the genuinely sweet, universally admired chapter president, Nutella, object of an unsanctioned desire in the brilliant opening story, "God" (and narrator of a subsequent story set years after he leaves college); there's Swordfish, whose atrocious sex-toy prank during an anti-rape march ends up bringing a wooden house mascot to demonic life in the magical-realist "Ollie the Owl"; there's Petey, the gung-ho frat officer who's always up for anything ("The Treasurer"); there's the thoughtful non-Greek freshman from Long Island (in the poignant "Cassiopeia") who comes to think of fraternities, despite an instinctive distaste for them, as a potential refuge from the anything-goes ethos of Amherst and wanders one night into a house where he has an utterly unexpected encounter; there are the idiot powers that be in "Hell" who, eager to concoct fresh humiliations for new pledges, invite an alumnus, a naval intelligence officer, to help them—and very soon find themselves contemplating deeper, darker types of initiation rituals than they'd intended. Nugent writes memorable women here, too: the title character in "God"; a wunderkind film director; the homeless, cocaine-selling dropout, Claire, who narrates the final story, "Safe Spaces." This is a book about the awkward, awful passage between adolescence and adulthood and about the way these unwary, ill-prepared boys negotiate it, or try not to.

Nugent manages—the mark of the master satirist—to be simultaneously compassionate and ruthless. Splendid.