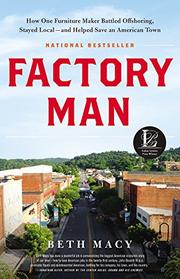 How One Furniture Maker Battled Offshoring, Stayed Local--and Helped Save an American Town

The story of one man’s fight to save American furniture manufacturing jobs in the face of a deluge of cheap Chinese imports.

In this welcome debut, winner of the 2013 J. Anthony Lukas Work-in-Progress Award, Roanoke Times reporter Macy brings to life the rise of family-owned Bassett Furniture Company as the world’s largest producer of wooden furniture and John Bassett III’s epic struggle to keep his company in business amid unfair overseas business practices that forced many U.S. manufacturers to move their factories abroad. A brash, patriotic charmer fond of quoting George Patton (“When in doubt, ATTACK”), Bassett came from a long line of wealthy Virginians with “sawdust” in their veins. “The ‘fucking Chi-Comms’ were not going to tell him how to make furniture!” remarked one retailer. Drawing on prodigious research and interviews with a wide range of subjects, including babysitters, retired workers and Chinese executives, Macy recounts how Bassett, now in his mid-70s, mobilized the majority of American furniture manufacturers to join him in seeking U.S. government redress for unfair Chinese trade practices. The author’s brightly written, richly detailed narrative not only illuminates globalization and the issue of offshoring, but succeeds brilliantly in conveying the human costs borne by low-income people displaced from a way of life—i.e., factory jobs that their Appalachian families had worked for generations. Writing with much empathy, Macy gives voice to former workers who must now scrape by on odd jobs, disability payments and, in some cases, thievery of copper wire from closed factories. Her book is also a revealing account of the paternalistic Bassett dynasty, whose infighting was a constant diversion for everyone living in the company town. Ultimately, Bassett’s efforts saved some 700 jobs and his Vaughan-Bassett company, the nation’s largest wood bedroom furniture maker.

A masterly feat of reporting.