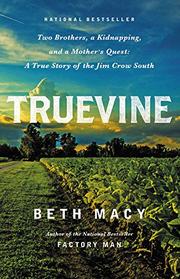 Two Brothers, a Kidnapping, and a Mother's Quest: A True Story of the Jim Crow South

A consummate chronicler of the American South spotlights the extraordinary history of two kidnapped African-American brothers enslaved as a circus sideshow act.

Expanding on her 2001 co-authored article series in the Roanoke Times, journalist Macy (Factory Man: How One Furniture Maker Battled Offshoring, Stayed Local—and Helped Save an American Town, 2014) reconstructs the folkloric yet true story of brothers George and Willie Muse, who, in 1899, at ages 9 and 6, toiled on a sweltering tobacco farm in Virginia. As black albinos bearing golden dreadlocks, the boys were considered “genetic anomalies” yet visually ideal when spied by Candy Shelton, a white bounty hunter scouring the area for “freaks” to enslave in circus sideshow acts. As circus entertainment crested in popularity at the turn of the 20th century, Macy writes, much money was to be made by sideshow managers eager to exploit those with physical abnormalities. Despite being falsely told that their mother had died, the Muse brothers went on to become “among the top tier of sideshow headline grabbers,” internationally known to Ringling Brothers and Barnum & Bailey audiences as “Eko and Iko, the Ecuadorian Savages.” Macy vividly illustrates circus life during the 1920s, and she movingly depicts how the brothers’ protective, determined mother, Harriett, eventually discovered and rescued them almost a decade and a half later. She sued the circus only to have George and Willie (along with little brother Tom) inexplicably return to the big top under Shelton’s management with decidedly mixed results. The story draws on years of diligent, investigative research and personal investment on the author’s behalf, and it features numerous interviews with immediate family, neighbors, distant relatives, Truevine townsfolk, and associated friends, most notably Nancy Saunders, Willie’s fiercely outspoken primary caregiver. Macy absorbed their own individual (and often conflicting) interpretations of the Muse kidnappings, condensing and skillfully braiding them into a sturdy, passionate, and penetrating narrative.

This first-rate journey into human trafficking, slavery, and familial bonding is an engrossing example of spirited, determined reportage.