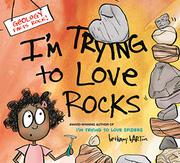 This metafictional picture book about the science of rocks is saved by a child who jumps in to convince readers—and the book itself—that rocks are fascinating.

“This is a book about geology!” the first spread exclaims. A rock is declared “so rock-like” and “hard” before the narrator realizes that rocks “don’t really do much” and gives up, announcing “THE END.” But before readers can shut the book, a black girl with frizzy hair and large eyes calls out from the white space, “Wait!” In a back and forth with the narrator, the young scientist keeps the book going by pointing out that all the exciting topics the narrator is ready to move on to (volcanoes, diamonds, or fossils) are all a part of geology. The girl, who happens to be president of the rock club, takes on the challenge of making the narrator love rocks. Their humorous, tongue-in-cheek interaction will keep children entertained, all while educating readers about the science of geology, from the rock cycle to the process by which gemstones are formed. Chock full of facts, diagrams, and examples, including fun end pages, this book will reward readers who return to it frequently. Bold lines, lively colors, and clever use of white space make for an eye-catching read.

Playfully persuades the most rock-averse readers to love rocks.