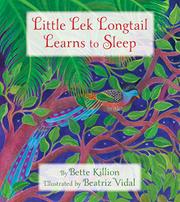 Combining elements of the traditional folk tale and an Aesop’s fable, Killion offers a moral tale about how the now-threatened argus pheasant learned to sleep through the night.

In a jungle in Thailand, an argus pheasant is born with an unusually long and brightly colored tail and is named Little Lek Longtail by his “proud mother.” As he grows, his tail also grows: “longer, brighter, and more beautiful.” Despite his beauty, Lek is kind and thoughtful, a friend to all the other birds in the forest. However, he is afraid of nighttime predators—so afraid he cannot fall asleep. Even his mother cannot comfort him. One day, Lek sees a man and his son outsmart a bask of crocodiles to safely cross a river. In amazement he concludes, “There is always a way if one just thinks of it.” Lek begins to observe other creatures using their attributes and talents to help themselves and realizes he can use his long, extravagant tale as an alarm of sorts. In contrast to Killion’s dry and contrived text, Vidal’s vivid and vibrant art shines. She deliberately omits white space, packing a profusion of color, details, and textures across the pages to re-create the dense, diverse jungles of Southeast Asia. The appendix provides interesting argus pheasant facts.

While Killion’s efforts to highlight a little-known creature and teach a moral lesson are commendable, the preachy tone may turn off kids and adults alike.