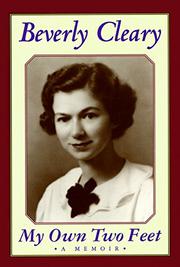 MY OWN TWO FEET

Continuing her memoirs, begun so successfully in The Girl From Yamhill (1988), Cleary here covers the eventful years that began with her boarding a bus for junior college in California and ended with the publication of her first children's book in 1946. In between she attended the University of California at Berkeley, received a degree in library science, met Clarence Cleary (there is little doubt about the outcome of that romance), worked as a librarian in smalltown Yakima, Washington, in army posts during WW II, and in a book shop for four Christmas rushes in a row. With lively wit, Cleary recounts her many amusing experiences—such as her confusion over being told to count the "little brown things" in the bookstore before the arrival of the Little, Brown sales representative. She never minces words when describing her occasional failures or the strained relations with her parents. In the end, she writes the story of a boy named Henry Huggins; the rest—and we hope it's forthcoming in another installment—is children's book history. The writer brings the same verve to her own story that has made her fiction classic for nearly 50 years. In her, readers will find a character worthy of even Cleary's imagination. (Biography. 12+)