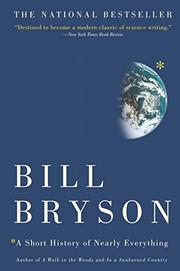 A SHORT HISTORY OF NEARLY EVERYTHING

Bryson (I'm a Stranger Here Myself, 1999, etc.), a man who knows how to track down an explanation and make it confess, asks the hard questions of science—e.g., how did things get to be the way they are?—and, when possible, provides answers.

As he once went about making English intelligible, Bryson now attempts the same with the great moments of science, both the ideas themselves and their genesis, to resounding success. Piqued by his own ignorance on these matters, he’s egged on even more so by the people who’ve figured out—or think they’ve figured out—such things as what is in the center of the Earth. So he goes exploring, in the library and in company with scientists at work today, to get a grip on a range of topics from subatomic particles to cosmology. The aim is to deliver reports on these subjects in terms anyone can understand, and for the most part, it works. The most difficult is the nonintuitive material—time as part of space, say, or proteins inventing themselves spontaneously, without direction—and the quantum leaps unusual minds have made: as J.B.S. Haldane once put it, “The universe is not only queerer than we suppose; it is queerer than we can suppose.” Mostly, though, Bryson renders clear the evolution of continental drift, atomic structure, singularity, the extinction of the dinosaur, and a mighty host of other subjects in self-contained chapters that can be taken at a bite, rather than read wholesale. He delivers the human-interest angle on the scientists, and he keeps the reader laughing and willing to forge ahead, even over their heads: the human body, for instance, harboring enough energy “to explode with the force of thirty very large hydrogen bombs, assuming you knew how to liberate it and really wished to make a point.”

Loads of good explaining, with reminders, time and again, of how much remains unknown, neatly putting the death of science into perspective.