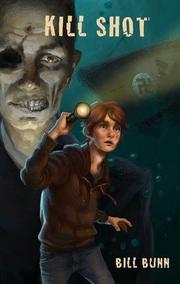 The discovery of a sunken World War II submarine plunges a rootless Labrador teen into a whirl of weird revelations and deadly danger.

Writing as if he were paid by the plotline, Bunn takes an actual news item about a similar find and spins around it a mare’s nest of premises and genre tropes. Having been shuttled for years among successive sets of exploitative foster parents and a group home, Wednesday skeptically fetches up in a run-down trailer with an out-of-work handyman and an airheaded beautician. Then, rambles in the nearby woods bring him encounters with Stump (aka Emily), a rough-hewn hermit’s home-schooled (but strangely well-socialized) daughter, and also the hidden hatch of a U-boat. Intercut flashbacks reveal that the German sub sank in the local river during a secret mission 70-plus years ago. The skeleton-filled sub contains both leads to a murderous spy ring still operating nearby and (shades of Dan Brown) an ancient weapon slated to join a cache of like mystical artifacts stolen by the Nazis. Perhaps unsurprisingly, the author leaves much unexplained (how did that sub come to be buried in dry ground?), is unable to maintain either logical or tonal consistency, and brings the tale to a confused climax that combines kidnappings, gunfire and laxatives.