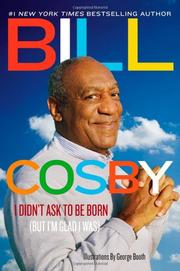 The Cos again waxes funny on the commonplace happenings of life as we may know it.

With his patented good humor, Cosby (I Am What I Ate… and I'm Frightened!!!: And Other Digressions from the Doctor of Comedy, 2003, etc.) grouses, like many of his contemporaries, about kids today. As in previous collections, the memoir covers his own Golden Age, that long-gone middle of the 20th century in the projects of the City of Brotherly Love. He remembers the daring exploration peculiar to childhood, recalling the monkey bars in the outfield of his sandlot softball games, riding the trolley, the movie house and other local haunts—and of course, the girls. It’s part memoir, part shtick and mostly sly. Bible scholar Cosby offers his exegesis on Genesis, and he reworks his exasperation about the supremely ugly Cabbage Patch Dolls. His standup timing, still one of the best in the business, works in the single-pagers, but is more measured in the short stories as they search for vagrant punch lines. If there are fewer rim shots than in the past, Cosby is still quite entertaining, and the great George Booth provides apt illustrations. For fans, a small Philly cheesesteak, nonchalant as youth itself, by a comic master.