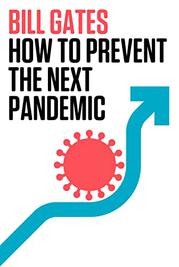 HOW TO PREVENT THE NEXT PANDEMIC

The tech mogul recounts the health care–related dimensions of his foundation in what amounts to a long policy paper.

“Outbreaks are inevitable, but pandemics are optional.” Thus states the epidemiologist Larry Brilliant, a Gates adviser, who hits on a critically important point: Disease is a fact of nature, but a pandemic is a political creation of a kind. Therefore, there are political as well as medical solutions that can enlist governments as well as scientists to contain outbreaks and make sure they don’t explode into global disasters. One critical element, Gates writes, is to alleviate the gap between high- and low-income countries, the latter of which suffer disproportionately from outbreaks. Another is to convince governments to ramp up production of vaccines that are “universal”—i.e., applicable to an existing range of disease agents, especially respiratory pathogens such as coronaviruses and flus—to prepare the world’s populations for the inevitable. “Doing the right thing early pays huge dividends later,” writes Gates. Even though doing the right thing is often expensive, the author urges that it’s a wise investment and one that has never been attempted—e.g., developing a “global corps” of scientists and aid workers “whose job is to wake up every day thinking about diseases that could kill huge numbers of people.” To those who object that such things are easier said than done, Gates counters that the development of the current range of Covid vaccines was improbably fast, taking a third of the time that would normally have been required. At the same time, the author examines some of the social changes that came about through the pandemic, including the “new normal” of distance working and learning—both of which, he urges, stand to be improved but need not be abandoned.

Gates offers a persuasive, 30,000-foot view of a global problem that, he insists, can be prevented given will and money.