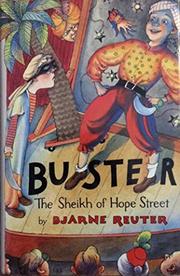 BUSTER, ``THE SHEIKH OF HOPE STREET''

A second bittersweet story about the hero of Buster's World (1990 Batcheldor Award)—with the vulnerable but resilient Danish boy now yearning to play the lead in a school play. Telling scenes reveal that Buster's life isn't easy: he must fetch his father home from a bar; he shares a bed with his sister; he's treated callously by teachers, the play's director, and a school custodian—only one of the blindly angry people he contends with. Creative and sensitive as well as exasperating, Buster counters with mischief—not all of it innocent: he tricks the privileged boy chosen to play the sheikh into letting him paint his face green—but he's also the sympathetic confidant of a neighbor, a recent widower, and, for all its faults, his family is a loving one. Like his character, his age is a surreal blend of playfulness and adult experience—though he does decimals in math, Buster's constant companion is ``Charlie Mane,'' a broomstick horse. In the book's most poignant moment, just after a teacher has called him a ``zero...[a] nothing,'' Buster's told by the custodian that Charlie Mane has been burned: he was infested with lice. The weeping Buster still has courage and a sense of his own value: running free, he shouts, ``I'm Buster...I'm not nothing.'' A moving story that captures childhood's essence in a rare blend of unblinking realistic detail, pathos, and rollicking, roguish humor. In Bell's excellent translation, the style is wonderfully vigorous and colorful. (Fiction. 9+)