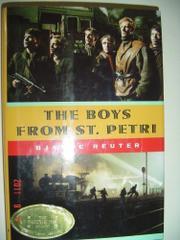 THE BOYS FROM ST. PETRI

A sense of pressure permeates this tightly focused novel about young Danish resistance fighters in 1942. Led by Minister Balstrup's son Gunnar, the boys at first engage in harmless pranks like stealing German license plates, street signs, and caps. The stakes rise dramatically after Otto and his pilfered Luger are accepted into the group and the boys begin to risk their lives to sabotage German operations. Complicating the relationship between Lars, the viewpoint character, and Gunnar, his older brother, is their subtle rivalry over the beautiful Irene. And threatening the secrecy of their subversion is the presence of a Jew, Filip Rosen- -St. Petri's church organist, adopted member of the Balstrup family, and intended victim of Nazi sympathizer Svend Hansen, the ``Suckerfish.'' In a credible conclusion, four of the boys, under arrest, are in transit to an unknown destination. Even so, the final pages are suffused with the elation of victory and the success of their last defiant act, giving release at last to the story's relentless tension. An excellent complement to Carol Matas's Lisa's War (1989) and its sequel. (Fiction. 12+)