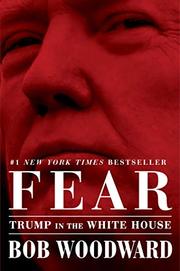 Trump in the White House

A dish-filled tiptoe through the current White House in the company of an all-knowing tour guide, legendary Washington Post investigative reporter and definitive insider Woodward (The Last of the President’s Men, 2015, etc.).

“He’s always looking for adult supervision.” So says big-money donor Rebekah Mercer to alt-right mastermind Steve Bannon of Donald Trump early on in Woodward’s book, setting a theme that will be sounded throughout the narrative. By the author’s account, Trump, sensitive and insensitive, out of his element and constantly enraged, cannot be trusted to act on his own instincts while anywhere near the Oval Office. Indeed, the earliest and instantly newsworthy moment of the book comes when economic adviser Gary Cohn spirits away a letter from Trump’s desk that would have broken the U.S. alliance with South Korea. Trump demanded the letter but then, it seems, forgot about it in its absence. “It was no less than an administrative coup d’état,” writes Woodward, “an undermining of the will of the president of the United States and its constitutional authority.” It’s not the sole instance, either, as the author steadily recounts. Drawing on deep background, meaning that sources cannot be identified—the reasons are immediately evident—Woodward ticks down a long list of insiders and their various ways of adapting to the mercurial president, sometimes successfully but more often not. One figure who can be seen constantly walking that line is South Carolina Sen. Lindsey Graham, whom former staffer Reince Priebus sold on Trump by saying, “you’re a lot of fun. He needs fun people around him.” Trump emerges as anything but fun—but also rather easily managed by those around him, so long as he is able to sign documents (“Trump liked signing. It meant he was doing things, and he had an up-and-down penmanship that looked authoritative in black Magic Marker”) and otherwise look presidential.

Woodward’s book will shock only those who haven’t been paying attention. For those who have, it reinforces a strongly emerging narrative that there’s a serious need for grown-ups on Pennsylvania Avenue—grown-ups who have read the Constitution.