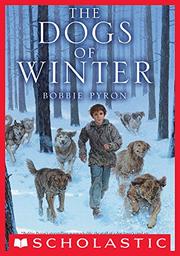 THE DOGS OF WINTER

An orphaned boy in Russia survives as a member of a pack of dogs.

Ivan is only 4 years old when he runs away to the streets of Moscow. At first, he is taken in by a scruffy group of children under one adult’s control. They live in the subway stations, begging and stealing food. He soon befriends and is adopted by a small group of dogs and becomes one of them. They survive on the trains in the winter and in the forest during the summer. Ivan keeps a button belonging to his (probably dead) mother as a talisman and remembers the fairy tales she read to him. Increasingly, his time with the dogs provides nourishment for both his hungry belly and his soul. Threats are ever present in the form of police, gangs of teens and wild animals in the forest. Two years later he is captured, and after months of care, he regains his humanness. Pyron has based her story on magazine articles about a Russian feral child, one of hundreds of thousands whose lives were disrupted by the dissolution of the Soviet Union. She presents Ivan’s story as a first-person narrative in beautifully composed writing enhanced by Ivan’s visual acuity and depth of emotion.