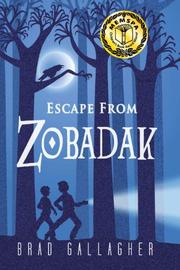 Four children find their way into another world through a hidden doorway in a mysterious old piece of furniture.

Gallagher elaborates on this oddly familiar premise by (eventually) explaining that the right sort of wooden joinery will link furniture from any place or time. Billy, his little sister Sophie and their friends Chris and Maggie discover a seemingly endless maze of hallways lined with doors and drawers full of strange artifacts by crawling into a nightstand belonging to missing Uncle Gary. The labyrinth is actually a “cabinet of curiosities” that brilliant carpenters of many generations have been building to store treasures like Excalibur and the Thunderbird Photograph. Before this is explained, however, the four children have spent many chapters wandering the halls at random—and also being menaced in the outside world by animated wooden puppets from the fictional “Zobadak Wood Company,” who are after Uncle Gary and the nightstand at the command of a shadowy figure named Brope. Along with introducing scads of enigmatic elements from flocks of aggressive crows to a mischievous fairy, the author injects artificial melodrama into the tale by having Billy and Sophie rescue their pointlessly kidnapped parents. He clumsily tries for comic relief by casting the puppets as inept Abbott-and-Costello types and with no perceptible rationale closes by having all of the adults stonewall or downplay everything that has happened.

Inventive worldbuilding, but way too much is left unexplained and unresolved.