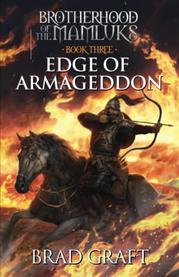 This third installment of a historical fiction series focuses on Mamluk warriors.

Graft follows up his previous book, A Lion's Share(2019), with another narrative based on highly trained, enslaved soldiers known as Mamluks. It is the year 1257 when the Sultan of Egypt is murdered in his bath. It does not take long for Cenk, a Mamluk from the preceding two installments with a penchant for koumis (fermented mare’s milk), to dispense with the culprits. But what does the future hold for Egypt? Things are tense throughout the region. This is especially true thanks to a threat from the East. Mongol forces are on the warpath; their destruction of Baghdad is ruthless and quick. Those who hope to withstand one of their invasions will need more than luck on their side. It’s a good thing Egypt has men like Leander. Leander, a Mamluk who defected from the French years ago, is on a scouting mission. What he sees is not encouraging: The Mongols’ weaponry is advanced and their numbers are immense. To further complicate matters for Leander, a spy is looking for him. Meanwhile, an accomplished Kipchak craftswoman named Esel embarks on her own path of survival. Esel seeks to escape the life of an enslaved person to help a nephew she has not seen in years. Early portions of the narrative that focus on Esel can move slowly. Readers come to understand all about how (and why) Esel is so good at making bows. They also learn how important bows are when one lives in a harsh steppe environment. Wolves eating your livestock? Better have some well-made weapons at your disposal. Nevertheless, the story kicks into a higher gear when attention turns to the Mongols. Even if some of the political maneuvering and alliances can be complicated, readers learn a lot about the opponents approaching the Mamluks. From wielding mangonels and 12-foot lances fitted with hooks to displaying a fondness for systematically destroying local structures (and subsequently catapulting the debris), a fierce group that is too often generalized as a faceless horde is skillfully illuminated. When a battle approaches, even the horses “snort their realization of what soon comes.”