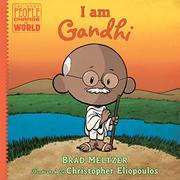 After describing Gandhi’s early childhood experiences, the book dives into the racism he experienced in South Africa, the development of his philosophy of “Satyagraha,” or “Truth-Force,” and his critical role in the Indian independence movement. It ends with a brief timeline of Gandhi’s life, some photographs, and suggestions for further reading. Similar to other books in the series, child Gandhi is depicted as an old man, which is quite confusing. This is particularly an issue for Gandhi as he only adopted the dhoti he wears throughout this book in his late 40s while protesting against the British. There are also many instances of cultural insensitivity throughout the book. Crucially, Meltzer distorts Gandhi’s original quote “In a gentle way, you can shake the world” as “I will shake the world.” Gandhi was not known as one to take credit for his successes, much less to claim he could shake the world. Another example of misrepresentation is the narration of an incident in which Gandhi refused to copy from another child despite his teacher’s demand that he do so. The text is inaccurate and omits to mention that the refusal by Gandhi was during an exam. Moreover, the illustration depicts the teacher as an Indian in the act of putting his sandaled foot on the book, which goes against a deep-rooted Indian tradition of respect for books; as Gandhi recorded the story, the teacher had the English name of Mr. Giles and used his boot to prod Gandhi.

Only barely informative and severely lacking in authenticity.