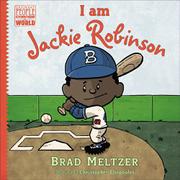 I AM JACKIE ROBINSON

Baseball’s No. 42 strikes out.

Even as a babe in his mother’s arms, Robinson is depicted wearing his Brooklyn Dodgers baseball cap in this latest entry in the Ordinary People Change the World series. He narrates his childhood alongside cartoon panels that show him as an expert runner and thrower. Racism and poverty are also part of his growing up, along with lessons in sharing and courage. Incredibly, the Negro Leagues are not mentioned beyond a passing reference to “a black team” with a picture of the Kansas City Monarchs next to their team bus (still looking like a child in the illustration, Robinson whines, “Gross! Is this food or goo?”). In 1946, Branch Rickey signs him to play for the Dodgers’ farm team, and the rest, as they say, is history. Robinson concludes his story with an exhortation to readers to be brave, strong and use their “power to do what’s right. / Use that power for a cause that you believe in.” Meltzer writes his inspirational biography as a first-person narrative, which risks being construed and used as an autobiography—which it is not. The digitally rendered cartoon illustrations that show Robinson as a perpetual child fall sadly short of capturing his demeanor and prowess.