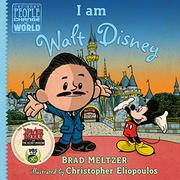 I AM WALT DISNEY

The iconic animator introduces young readers to each “happy place” in his life.

The tally begins with his childhood home in Marceline, Missouri, and climaxes with Disneyland (carefully designed to be “the happiest place on Earth”), but the account really centers on finding his true happy place, not on a map but in drawing. In sketching out his early flubs and later rocket to the top, the fictive narrator gives Ub Iwerks and other Disney studio workers a nod (leaving his labor disputes with them unmentioned) and squeezes in quick references to his animated films, from Steamboat Willie to Winnie the Pooh (sans Fantasia and Song of the South). Eliopoulos incorporates stills from the films into his cartoon illustrations and, characteristically for this series, depicts Disney as a caricature, trademark mustache in place on outsized head even in childhood years and child sized even as an adult. Human figures default to white, with occasional people of color in crowd scenes and (ahistorically) in the animation studio. One unidentified animator builds up the role-modeling with an observation that Walt and Mickey were really the same (“Both fearless; both resourceful”). An assertion toward the end—“So when do you stop being a child? When you stop dreaming”—muddles the overall follow-your-bliss message. A timeline to the EPCOT Center’s 1982 opening offers photos of the man with select associates, rodent and otherwise. An additional series entry, I Am Marie Curie, publishes simultaneously, featuring a gowned, toddler-sized version of the groundbreaking physicist accepting her two Nobel prizes.