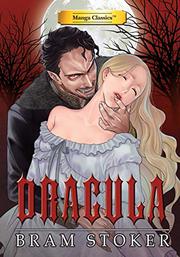 From the Manga Classics series

A business trip becomes a source of gothic terror when a strange client named Count Dracula insists that solicitor Jonathan Harker remain in his castle in Transylvania indefinitely. Meanwhile, Harker’s fiancee, Mina, stays with her friend Lucy, whose sleepwalking problem puts her in the path of a creature who needs fresh blood. Lucy’s three suitors, with help from a trusted doctor, try to save Lucy, but when she dies and becomes one of the undead, they set her soul free in a gruesome ritual before joining forces with Harker to pursue Dracula. Mina is kept apart from the action because women are deemed unsuitable for such work, but this does not prevent her from becoming a target. The gender-based violence is more disturbing when depicted in images rather than the original text, and although the Count is described as pale, he is illustrated in dark hues and shadow, reinforcing tropes of lightness and darkness as good and evil, respectively. Journals, newspapers, letters, and telegrams are set in text boxes in varying fonts. The different characters’ perspectives feel somewhat disjointed, but the pace of the action will keep readers engaged to the end.