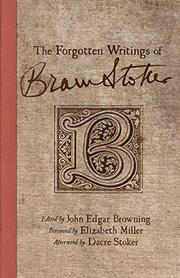 THE FORGOTTEN WRITINGS OF BRAM STOKER

A curious collection of miscellaneous writing by the author of Dracula.

Editor Browning digs into obscure archives for lost works by Stoker (1847–1912), who maintained a rich writing life while serving a 30-year tenure as business manager for the actor Sir Henry Irving, based at the Lyceum Theatre in London. Much of Stoker’s work has, “until now eluded bibliographers,” perhaps because it’s not terribly memorable—for example, many early novels and stories that appeared largely in serial form in British and American periodicals starting with Under the Sunset in 1881. (Browning reports definitively that Dracula was first serialized in the Charlotte Daily Observer from July 16, 1899 to December 10, 1899, much earlier than previously thought.) The tales included here display some of Stoker's weirdly meandering plots and mischievous humor, such as in “Old Hoggen: A Mystery,” narrated by a comfortably well-off husband who is sent out to scour the seacoast of Charmouth for crabs for his mother-in-law and “her daughter” and ends up stumbling literally upon the remains of an old vanished rich denizen by the name of Jabez Hoggen. (One gruesome detail involves several large crabs “walking out of the body,” and which the expedient narrator pockets.) Unsurprisingly, many of the selections reflect Stoker’s close working relationship with the British theatrical company, as in “What They Confessed: A Low Comedian’s Story,” as well as glowing appreciations of actors Irving and Ellen Terry. Also included is a fascinating catalog of the items for sale at the 1913 auction of Stoker’s property, especially his library, full of books by his friend Walt Whitman.

A dogged but uneven work of literary excavation of most interest to literary scholars.