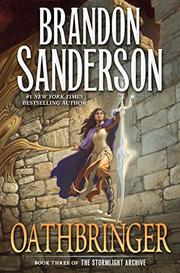 An epic fantasy about the return of an ancient, world-destroying evil.

God is dead. And Odium, the god who killed the Almighty, is unleashing terrible monsters to destroy humankind. Dalinar Kholin has bonded with the powerful spren known as the Stormfather and led his people to the lost city of Urithiru, but his work is just beginning. Now he has to unite the nations of the world to fight the Voidbringers and prepare for “a millennia-old conflict of ancient creatures with inscrutable motivations and unknown powers.” Danger is everywhere, even in his own stronghold, where the highprince Sadeas has been murdered—unbeknownst to Dalinar, by his own son, Adolin Kholin—and in Dalinar’s own mind, where certain memories are missing. Meanwhile, Kaladin is looking for his family, and Shallan is struggling to live with what happened to hers. In this third book in the Stormlight Archive series, it feels like the plot is driving the characters rather than the other way around, but those characters are still rich and vivid, and the plot is still gripping and building toward another dramatic climax. Sanderson (Edgedancer, 2017, etc.) manages to tell a compelling story while raising questions about what it means to be a moral actor in a complicated world.

Fans of the Stormlight Archive series will enjoy this book, which brings back favorite characters and deepens a well-drawn fantasy world.