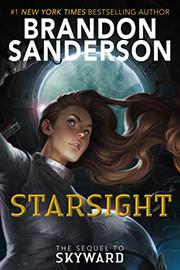 From the Skyward series, volume 2

On a desperate mission to steal hyperdrive technology from the crablike invading Krell who are threatening to destroy her beleaguered home colony on Detritus, Spensa, who is white, holographically disguises herself as a violet-skinned UrDail and slips into a Krell pilot training program for “lesser species.” The discovery that she’s being secretly trained not to fight planet-destroying delvers but to exterminate humans, who are (with some justification, having kindled three interstellar wars in past centuries) regarded in certain quarters as an irrationally aggressive species, is just one in a string of revelations as, in between numerous near-death experiences on practice flights, she struggles to understand both her own eerie abilities and the strange multispecies society in which she finds herself. There are so many characters besides Spensa searching for self-identity—notably her comic-relief sidekick AI M-Bot, troubled human friend Jorgen back on Detritus, and Morriumur, member of a species whose color-marked sexes create trial offspring—that even with a plot that defaults to hot action and escalating intrigue the pacing has a stop and start quality. Still, Spensa’s habitual over-the-top recklessness adds a rousing spark, and the author folds in plenty of banter as well as a colorful supporting cast.

Not quite the wild ride of Skyward (2018) but still great fun.