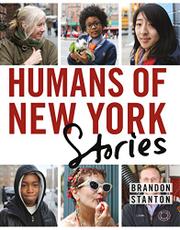 Photographer and author Stanton returns with a companion volume to Humans of New York (2013), this one with similarly affecting photographs of New Yorkers but also with some tales from his subjects’ mouths.

Readers of the first volume—and followers of the related site on Facebook and elsewhere—will feel immediately at home. The author has continued to photograph the human zoo: folks out in the streets and in the parks, in moods ranging from parade-happy to deep despair. He includes one running feature—“Today in Microfashion,” which shows images of little children dressed up in various arresting ways. He also provides some juxtapositions, images and/or stories that are related somehow. These range from surprising to forced to barely tolerable. One shows a man with a cat on his head and a woman with a large flowered headpiece, another a construction worker proud of his body and, on the facing page, a man in a wheelchair. The emotions course along the entire continuum of human passion: love, broken love, elation, depression, playfulness, argumentativeness, madness, arrogance, humility, pride, frustration, and confusion. We see varieties of the human costume, as well, from formalwear to homeless-wear. A few celebrities appear, President Barack Obama among them. The “stories” range from single-sentence comments and quips and complaints to more lengthy tales (none longer than a couple of pages). People talk about abusive parents, exes, struggles to succeed, addiction and recovery, dramatic failures, and lifelong happiness. Some deliver minirants (a neuroscientist is especially curmudgeonly), and the children often provide the most (often unintended) humor. One little boy with a fishing pole talks about a monster fish. Toward the end, the images seem to lead us toward hope. But then…a final photograph turns the light out once again.

A wondrous mix of races, ages, genders, and social classes, and on virtually every page is a surprise.